The railroad ferry crossed the river at a point below the wagon ferry.  The train started down the east bank from the train station on a gentle grade to the river.  It also ran on a cable and crossed directly over the river to the landing on the west bank and on up the bank to near the old bridge where it connected with the Red Mountain Railway line. When the bridge was completed in October 1897, the ferry was discontinued.
On May 9, 1897, Engine No. 3 overturned at the ferry landing. It was partially dismantled and pulled from the water over the next few days. 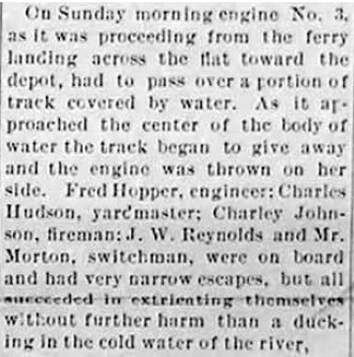 from  'Ferry Boats on the Columbia River' by Robert H. Ruby and John A. Brown

When the old timber-trestle bridge was condemned in October 1946, a car ferry was installed until the new highway bridge could be built. The L. A. MacLeod was 64 feet long and could hold eight cars.  It was powered by twin GMC diesel engines. "In high water we had to head up river and go as far as we could and then angle across to the other shore, as the water was two or three miles an hour faster than the ferry." - Jack Midkiff, operator.
The ferry burned on March 18, 1951. From then until the new bridge opened on June 13 of the same year, a 24 passenger boat took the place of the ferry.
Questions?  comments?      contact Jim Regis at:    jjregis@outlook.com